The Potency of an Empathy Pill 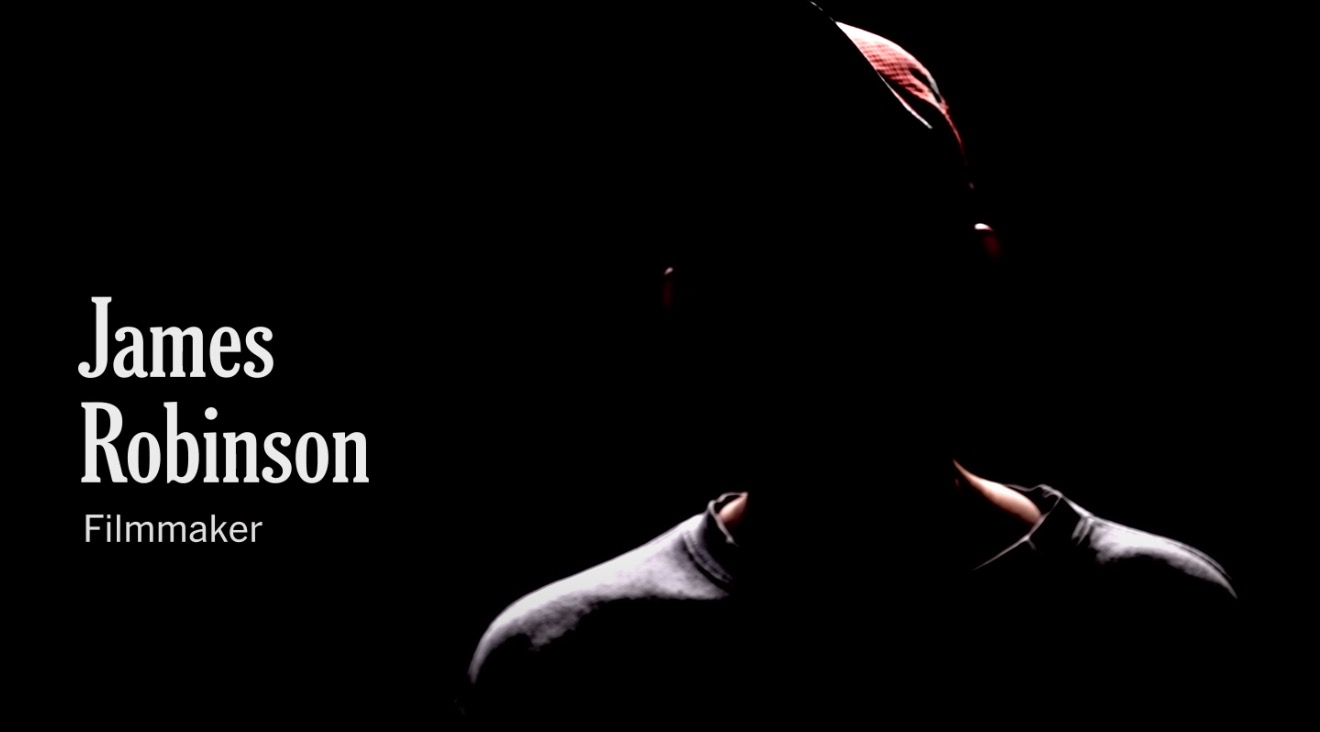 James Robinson grew up in Maine, where he played tee ball and hung out at the beach with friends. He went away to college at Duke University and now, in his early 20s, works as a filmmaker in Los Angeles. On paper, he seems like a “normal” guy.

But in real life, James is not treated as “normal.” In his words:

“It feels like everyone I meet is frolicking happily on a ship they’ve dubbed the ‘USS Normal.’ And then here I am, below the surface, feeling a bit isolated. But whenever I get up to the surface, where the people on the USS Normal can see me, everything starts to get a little weird. They get nervous. They don’t know what to do. So they just avoid looking [at me] altogether. Even my own family.”

Why would people be nervous about looking at James?

James was born with neurological and vision conditions that prevent his brain from connecting the images received from his left eye and right eye. Rather than collaborate, his eyes work independently. 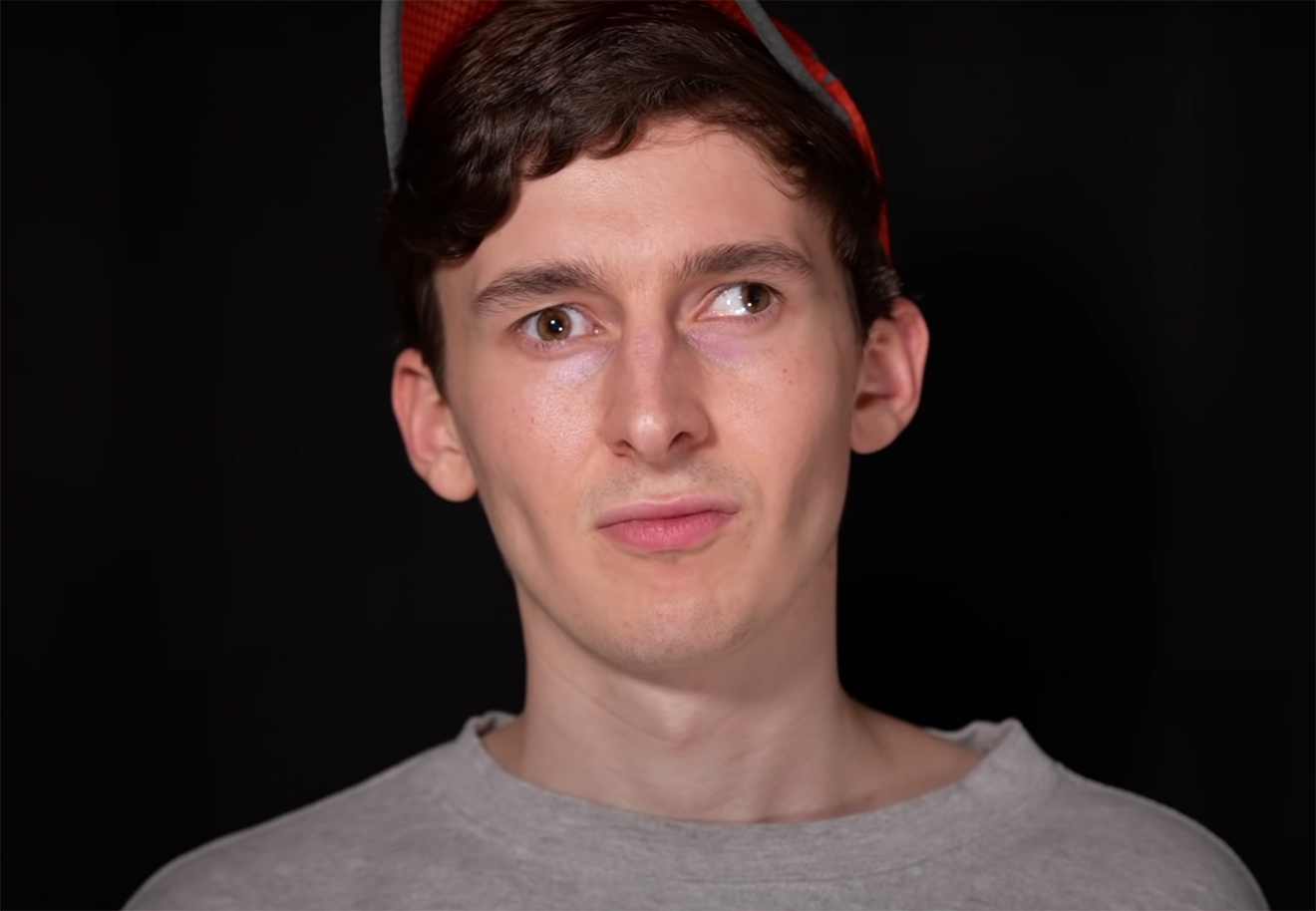 This lack of coordination leads to vision that bounces around, switching from one eye to the other — ultimately making it difficult for him to perform simple tasks. James’ conditions, and the way they manifest in his everyday life, are very complex. But most people he knows, including his parents and siblings, have no idea how this truly affects James — both physically and psychologically. In fact, it’s this disconnect that troubles him more than the condition itself. James states, “In all honesty, I don’t have a problem with the way that I see. My only problem is with the way that I’m seen. I just want to be able to connect with people.”

And so James, with his filmmaking talents, set out to show them — via a video in the New York Times opinion section, naturally.

James’s video is a tour de force of storytelling — it is informative and vulnerable, yet entertaining and even humorous. It implores those who comfortably “live aboard the USS Normal” to understand what life would be like if they were “overboard” — what he often feels. And, if the NYT.com comments section is any indication, his video communicated this loud and clear: 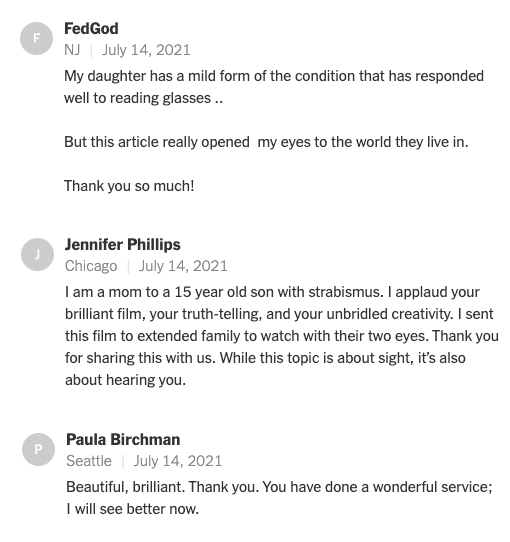 So, of course, now you must watch it!

What makes James’s video and his storytelling approach so compelling and powerful? And what can we, as marketers, learn from him when we create ways to empower our audiences to share their experiences?

James used video as his medium to convey his visual reality — the piece starts with a simple visual experiment that surprises his own family, who have presumably understood his condition for his entire life. He then freely mixes first-person POV, head-on interviews, old black-and-white film footage, and visual metaphors to engross the viewer.

Takeaway: Push the boundaries of the typical “patient interview.” Are there unexplored storytelling formats to illustrate the lived experiences and emotions of groups of people affected by medical conditions?

Garner surprise from the ordinary

James reveals how objects that many of us don’t think twice about (pencils, sliced cheese) are stumbling blocks for him. Universally relatable objects or situations can be a profound reflection of the experience of a condition — think ordering at restaurants for someone whose condition includes dietary restrictions, or joining in on group activities for someone who has a non-obvious physical limitation.

Takeaway: Are there seemingly mundane scenarios that could give an “ah-ha” moment of realization for your brand’s condition?

Help people use their voice, in whatever way they feel most comfortable

James not only felt empowered to challenge his own family and their misperceptions, but also share his experience with the readership of the second largest newspaper in the U.S. But other people may not be so brave and bold.

Takeaway: What can you create to adapt to the sharing preferences of different patients? Can you empower someone to use their own voice? Or allow them to use other voices?

Collaborate and distribute with mass media

While James’s initial goal with his film may have been to educate those closest to him, he was able to make an exponentially bigger impact by seeking out other platforms. The New York Times audience was likely not seeking information about this specific condition but was open to learning by watching a compelling narrative.

Takeaway: An effective partnership could bring an important story to the mainstream, without the audience needing to seek out an unbranded site.

There are countless other people like James out there — individuals who feel detached from those around them due to a health condition. It doesn’t even need to be a rare disease — something as prevalent as diabetes or high blood pressure can still create a stressful division between the sufferer and the people around them. While clinical counterparts in R&D are out there discovering and devising the best treatments to make these individuals’ disease management easier, marketers can deliver an equally powerful form of wellness by empowering empathy.

At any given time, there are hundreds of actual sledgehammers floating around the Heartbeat office and resting on shelves in Heartbeaters’ homes. To celebrate their first year on the team, each HB’er receives their very own sledge—a nod to our daily pursuit of tearing down tiresome healthcare marketing. To determine what is built in its place, we often turn to outside industries, cultural forces, and personal experiences. We eagerly share them with one another, and now we’re sharing them with you. Clear the way—here comes The Sledgehammer.