What the heck are you doing here?!

Just kidding! 🙂 We’re actually really glad you defied our direction—In fact, you helped us prove the very point that we’re going to make in this issue of The Sledgehammer. But first, we need to dust off our Psych 101 textbook and walk you through what just went down.

Imagine, for a second, that you’re on a beach. (*Sigh* How nice!) Everyone around you is wearing similar attire: one-pieces, bikinis, swim trunks, cover-ups. It’s exactly what we expect to see people wearing at the beach, right? This scenario is what psychologists would call a “descriptive norm”—a way of behaving that is so established that it has created an expectation for all future behavior to be the same.

Now, imagine that you look down the coastline and see a lone figure walking in your direction, parting the crowd, rocking… a big, puffy snowsuit. Psychologists would say this person is “deviating from the norm.” And, amongst your fellow beachgoers, this deviation is attracting a ton of attention: people are staring, pointing, laughing, and snapping pics, and they will probably even recount this happening later when they are asked about their day.

Ok, time to leave the beach (sorry) and come back to the present situation: When we told you, “Don’t read this,” we were also deviating from the norm. Everyone wants you to read their blog post or article—and they spend a lot of thought and effort trying to make that happen. But because we deviated from the norm and broke the pattern, we caught your attention, just like that wacko in the snowsuit. In fact, we probably caught your attention more so than the other norm-abiding messages you recently received.

So that’s a breakdown of what we did. Let’s talk about what you did.

It’s called “psychological reactance”—a near-instantaneous response that occurs when your behavioral freedoms are threatened or limited. We told you not to do something, seemingly reducing your options on how to behave. And you responded in the way that many people do when they experience reactance: with a motivation to regain freedom, often by defying the initial limitation. It explains why, when you are told not to touch the cooling cookies on the counter, you find yourself wanting them even more. (Also, cookies are delicious.)

So let’s recap: We told you not to read this, which was notable because people always want you to read stuff, and that deviation got your attention. And because we threatened your freedom to read it, you said, “Oh no, I’m reading this thing NOW!”

Now, as a marketer, imagine taking a similar approach with your target audience, by saying, “Don’t use my brand!”

While you may be muttering that now we’ve really lost it, there are several brands out there—including Apple, Patagonia, and even the Nebraska Tourism Commission—who would beg to differ. In fact, each successfully navigated human behavior in their own marketing efforts and generated a desired outcome: customers engaging with their brand.

Let’s see what we can learn from these norm-defying, reactance-creating marketers:

Have you ever considered taking your next vacation… in Nebraska? Likely not; a 2017 survey cited the state as being the least visited in the US. So when the Nebraska Tourism Commission wanted to overcome this, it leaned into the state’s stale persona by adopting the slogan, “Nebraska: Honestly. It’s Not For Everyone.” The accompanying campaign paired misconceptions about the state with visuals that proved the opposite, and with copy declaring that only a select group of people really know the true Nebraska. Not wanting to be left out of this exclusive club of tuned-in travelers, the public went searching for more info. Web traffic to VisitNebraska.com was up by 43% just six months after the campaign launch. 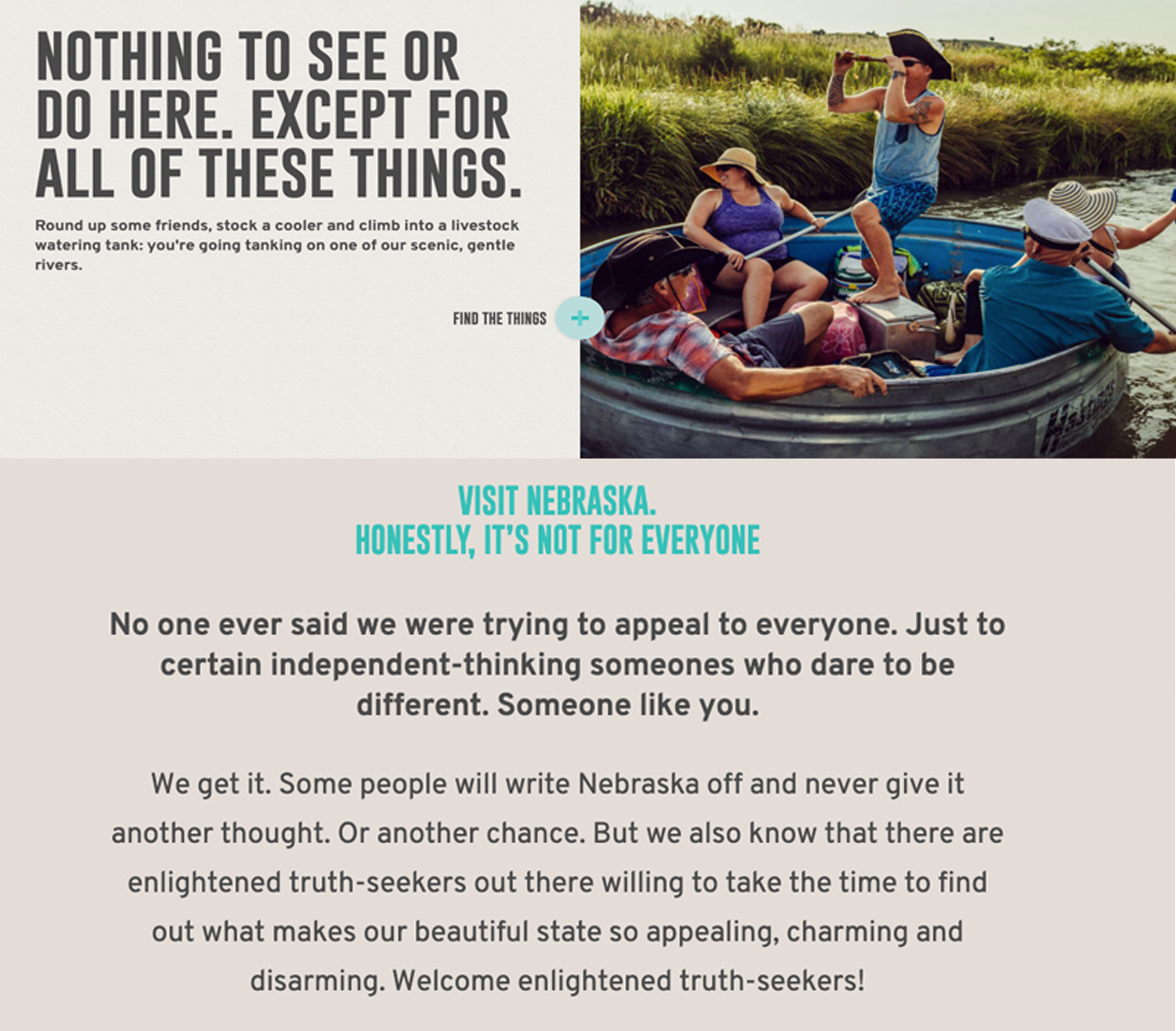 Little Caesars had attempted to differentiate itself from other pizza shops by offering “Hot-N-Ready” pizzas ready for pickup at any time. But the act of calling and ordering (and waiting) for a pizza was a norm that was pretty ingrained in the pizza lover’s mind. So Little Caesars decided to challenge that norm by going to great lengths to deter customers not to call them. Hungry consumers challenged Caesar’s commands by behaving otherwise—but the tiny emperor of pizza was prepared. Hilarity and memorability ensued.

Take Away the Sales Pressure and Connect on a Deeper Level

Over the years, Patagonia has cemented its status as a maverick of marketing. But its 2011 full-page ad in the Black Friday edition of The New York Times was uncharted territory: It featured a fleece zip-up with the enormous headline, “DON’T BUY THIS JACKET.” The ad went on to outline the natural resources and harmful waste that go into producing even the most-eco-friendly clothing, and it encouraged customers to only purchase what they need as a way to be more environmentally conscious. The norm-busting message was a refreshing take on the most capitalistic day of the year; it neutralized the playing field between brand and customer by removing the hard sell, allowing the opportunity to connect on a bigger unifying issue. And you better believe that those customers practiced psychological reactance—jacket sales increased 30% after the campaign. 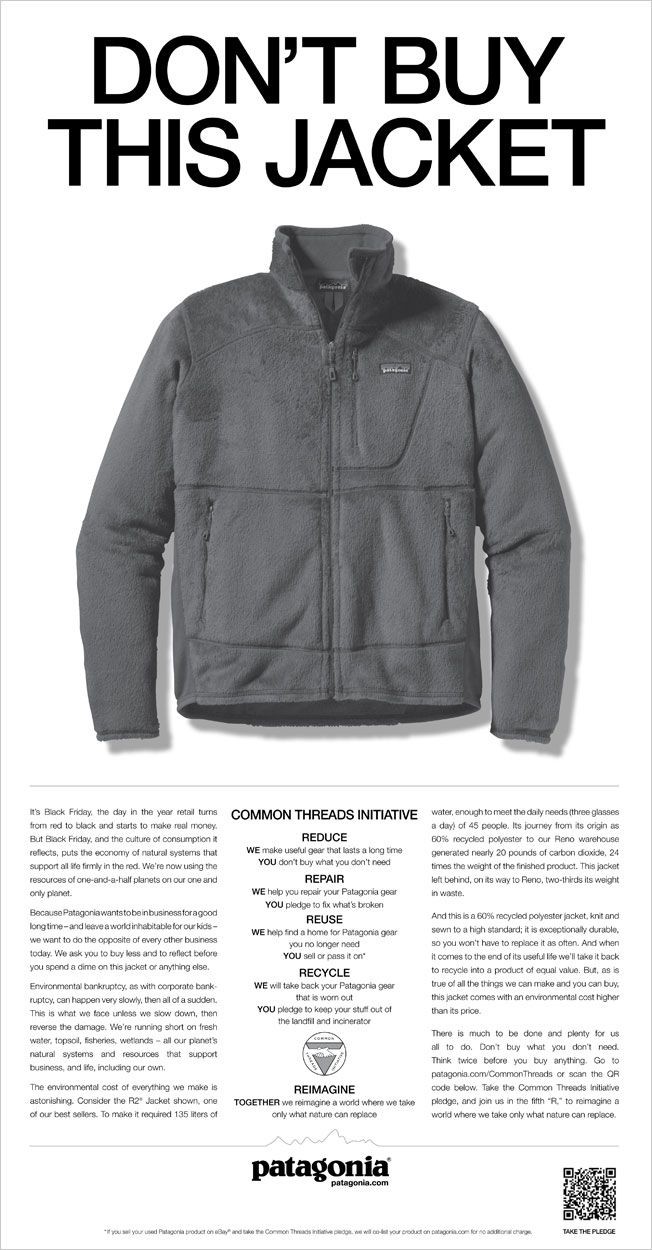 In the same way that we dislike when our behavioral freedoms are limited, we’re more comfortable making a decision when we know our choices (just not too many choices, mind you). With this insight in mind, it’s interesting that many brands only focus on themselves in their campaigns, leaving the comparison process up to the consumer. However, Apple decided to drive its comparative narrative via the “I’m a Mac/I’m a PC” campaign. If you relive the iconic commercials (a full 10 minutes of them can be found below), you’ll notice that Mac never blatantly disses PC. Instead, each spot presents a scenario and uses the dialogue to casually communicate the difference between the 2 options. Consumers always feel like they start with a choice—behavioral freedom intact—but each spot builds a case for the more compelling option.

Show Confidence in Your Product by Rendering It Obsolete

This may be the wackiest one of all (and thus, our favorite). Hinge, a dating app, was trying to stand out amongst the many other apps in the matchmaking space. They decided to lean into the growing mass critique of app-based dating: that the “service” was more about scoring in-app matches and developing a swiping addiction than it was about finding long-term love. So Hinge revamped their app’s functionality to focus on creating deeper connections, and they eventually made the ultimate proclamation via a marketing campaign, “Designed to be Deleted.” The app was seemingly so focused on finding love for its users that its ultimate goal was for it to be removed from their phones. Just imagine a pharma brand communicating something similar— “We’re so focused on getting you well that we hope you eventually don’t need us anymore.” Powerful.

Want more examples? Watch this iconic throwback from Toffifay telling kids that their product is a candy for grown-ups (and let’s face it, children = the pioneers of doing the opposite of what they’re told). Or check out this interesting approach from Toyota that seemingly misaligned itself with millennials, only to prove it was such a cool ride that it could even work miracles with their parents.

See, we told you this wasn’t that crazy of an idea!

But ya know, you probably shouldn’t explore this kind of approach with your brand. In fact, just take it out of your marketing playbook. And definitely don’t call us to help you with it. 😉

For HCPs, The Struggle Is Real

Heartbeat is a member of Publicis Health. © 2021 Heartbeat. All Rights Reserved.