Imagine your brand has been losing to bigger, better-funded competitors—with no clear way to avoid its demise.

REI, the outdoor gear retailer, found itself in this exact situation in 2015. The company’s market share was dwindling due to customers turning to big box and online retailers. Running a broad, flashy marketing campaign was out of the question—the company had a relatively miniscule media budget and couldn’t compete with these behemoths. Thus, the marketers at REI were faced with a classic Challenger dilemma: how could they differentiate their brand from Goliath-like competitors?

In November 2015, REI announced that it would do what no other larger retailer had ever done before: it would be closing all of its 143 stores (and its e-commerce site) on Black Friday and paying its 12,000 employees to instead spend the day in nature with family and friends. The brand’s CEO followed up this announcement with a viral video, urging customers and others across the country to do the same—”opt outside” instead of shopping in stores. REI focused its limited media dollars on full-page ads in major newspapers, and a comprehensive social media campaign for #OptOutside further amplified the message.

The results speak for themselves:

When it comes to brand differentiation, what can we learn from REI and its Opt Outside campaign-turned-identity? 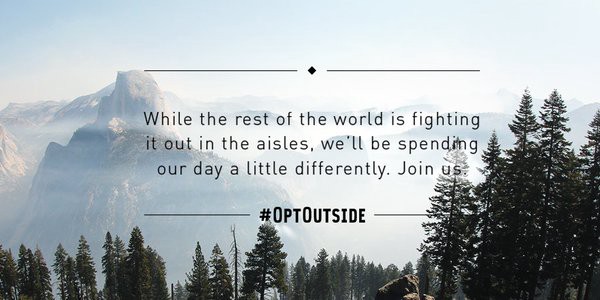 To be a contrarian, you must be bold

Simply saying you’re different won’t cut it. Today’s consumers expect you to prove it through your actions. Yet marketers still make the mistake of only going halfway in displaying their differentiation.

For example, what if REI attempted to identify itself as the brand that cares the most about getting its customers outdoors, but it did so only in the summertime, when spending time outside is a more popular activity? Sure, it aligns with the natural inclinations (and spending patterns) of its target audience. But there is nothing demonstrable or differentiating about this approach; it doesn’t show why they care the most. The genius of choosing a day like Black Friday is that it fully goes against the norm—both for consumers and for competing brands. The move’s audacity was ultimate proof of REI’s commitment to helping its customers embrace the outdoors. (Bonus: its boldness garnered wide-ranging attention, enabling the brand to overcome any media spend disadvantages with significant earned media and social media traction.)

Your differentiator must be an authentic one

In 2015, REI seemingly came out of nowhere with its Opt Outside initiative. It felt novel, it felt radical—but in reality, it was entirely consistent with the brand’s past behavior.

For starters, the company is actually a co-operative, which means they are in service of their co-op members and employees and not in service of greater profit. They are also known for providing financial support for initiatives aligned with preserving national parks and other natural areas that they want their customers to enjoy. The fact that REI had these additional creds to back up their campaign’s conscientiousness is what pushed the success of Opt Outside over the edge.

What to do if your brand doesn’t have a backlog of behavior to support a campaign or point of differentiation? While true authenticity is always best, it’s also possible to use an initiative or campaign to signal a new era for your company or product. In fact, REI did a little of this too, as you’ll see in this next learning…

After riding the positive PR tidal wave of the 2015 holiday season, REI could have settled back into its old retail routines. But the brand did exactly the opposite. Not only has it continued to close on Black Friday, it has also expanded the Opt Outside platform each year to further draw attention to issues the company, its co-op members, and its customer base all care about:

2016: Opt Outside expands to 700+ organizations, including brands like Lyft, who offered free rides for certain city dwellers to go to nearby national parks.
2017: Opt Outside employs a by-the-people, for-the-people approach with the creation of an experiential engine that allows users to search user-generated content tagged with #OptOutside for inspiration in their own outdoor adventures.
2018: Opt Outside adds a new emphasis on health & wellness, including an investment in a University of Washington study on the health impacts of being in nature.

Of course, as Black Friday 2019 draws near, REI is once again building on its campaign call-to-action—this time by encouraging consumers to “opt to act” by joining a nationwide clean-up effort. In explaining the connection, REI’s CEO wrote to the co-op members, “We’re still going to go outside and play—but this time we’re bringing our work gloves. It’s time to fight for life outdoors—and life on this planet.” Accordingly, the brand has organized city-based clean-up events, provided toolkits for DIY clean-ups, embarked on a new initiative for gear buy-back and rentals to empower a circular economy, and is changing its own operations in the pursuit of zero-waste.

So this Friday, whether you’re wandering the store aisles or wandering the great outdoors, ask yourself if your brand is going the distance, like REI did, when it comes to differentiating itself.

PS: To get involved in Opt Outside this year (and year-round), visit https://www.rei.com/opt-outside.