The Powerful Surge of a Crowd

Much like coworkers who breathlessly recap the latest episode of HBO’s Succession on Monday morning, Heartbeat’s strategists have a constant conversation around “Diagnosis,” a recurring New York Times column. The series, authored by physician and Yale medical professor Dr. Lisa Sanders, has run for over fifteen years as a medical mystery/solution column: a man whose rare spine tumor first manifested in uncontrollable hiccupping, or an afib patient who experienced sporadic brain bleeding because of a turmeric supplement.

Last year, the column decided to rewrite the rules. Now, each piece still presents a medical mystery—a real patient facing an actual medical case that teams of specialists and rare disease experts have been unable to crack: a man can’t stop fainting, a child has a genetic disorder documented only 21 times in history, a boy feels his brain “sloshing” around. But there is no solution… yet. Instead, the newspaper is crowdsourcing the answer by seeking ideas and insights from readers around the world that might have any insight into the enigma. 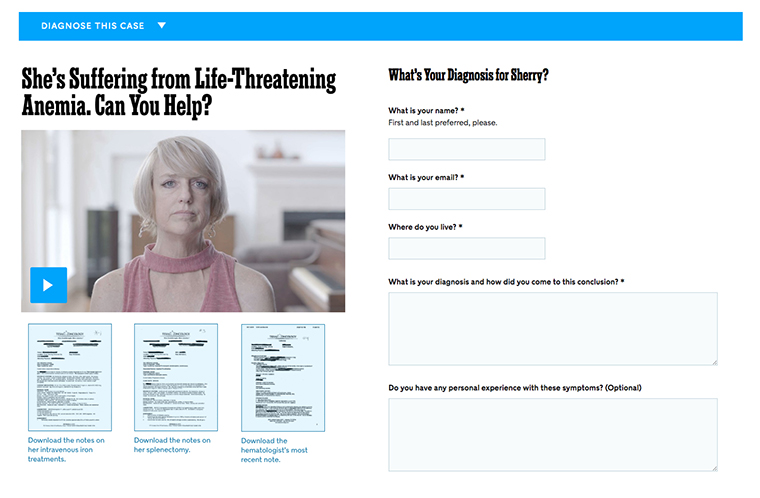 It’s riveting—and heartbreaking—stuff. So it shouldn’t be shocking that the Times has teamed up with Netflix to create a series by the same name where they reveal this crowdsourced evidence and use it to try to find a diagnosis. It’s like doing rounds with Hugh Laurie as he explores medical mysteries on House, combined with the thrill of analyzing evidence alongside Sarah Koenig on the Serial podcast.

When it comes to your own marketing efforts, the show’s concept is a prime example of how crowdsourcing—inviting your audience to participate in the content—can actually supercharge your content. Here are just some of the benefits:

Crowdsourcing gives you built-in followers. By contributing content, people become part-owners of the story. And when people have a stake in something, they want to see it succeed. “Diagnosis” isn’t the New York Times telling its own story, it’s the New York Times helping a group of people tell their story. The audience will see themselves in it (literally or figuratively), they’ll follow it, and they’ll tell others about it.

Crowdsourcing tells your audience that they matter. By asking your audience for their voice, you’re signaling that what they think, what they feel, has relevance. “Diagnosis” is such a good example of this—audience voice isn’t a novelty here; the TV show runs on the fuel of audience participation.

Content generated by an audience is content that is appealing  to an audience. Your audience is actually telling you what they want to hear! It’s not a bunch of marketers whiteboarding in a conference room—this is your audience saying what is interesting to them. It’s so easy to get stuck in content ruts, but crowdsourcing is a chance to shake things up and do it in a way that allows you to still feel confident that the proposed content will resonate.

You can binge “Diagnosis” on Netflix now.